You can find many hill towns in Tuscany, but San Gimignano gets very much of the attention. Why? A San Gimignano travel is particular in a few ways – all those towers make it fantastically picturesque from wherever outside the city and it’s not accessible by train which does help keep the huge crowds away.

It can still look invaded during the day in the high season, primarily because big tour buses drop daily guests off for a few hours at a stretch, so if you really want to feel these medieval streets at their most charming view, you’ll want to sleep over at least one night.

The overriding characteristic of San Gimignano – that just about every visitor will notice from a distance – are its spectacular and unmistakable towers that watch over the scene. And each one has its own history.

The town experienced a period of economic wealth and artistic flourish, above all in the mid-1300s, thanks to the merchants and pilgrims traveling along the Via Francigena; the route passed through San Gimignano, dividing it into two.

It was also during this time that the town’s foremost families challenged each other in building the highest tower, attempts to exhibit who held the most power.
This Medieval-style Keeping-Up-With-the-Joneses resulted in the Torre Comunale – also known as La Rognosa – as a means to put a stop to future towers rising ever higher. According to official decree, no other tower in San Gimignano could surpass that of La Rognosa. Around the year 1300, 70 towers symbolized the 70 wealthy families inhabiting this territory. Today, only 13 remain standing.

It was also in the same century that San Gimignano underwant a process of architectonic renovation, that comprised an expansion of the walls, the construction of numerous new palazzi, churches and convents – in the environs of Piazza della Cisterna and Piazza del Duomo – and their adornment with illustrious works of art.
Indeed, great artists from the Sienese school came specifically to San Gimignano to paint the treasures that the world can still see today. They were Simone Martini, Lippo Memmi and Puccio Taddeo di Bartolo.

Breathtaking religious, civic and military structures make for a captivating skyline, while the fruits of the land – saffron and Vernaccia – render San Gimignano an eternally sought-out destination, where travelers can live one of the most important epochs in human history, all while they enjoy some of the best of what life and nature have to offer.

What to Do in San Gimignano

Roaming through the whole town will merely take you a couple of hours, so you’ll want to enjoy your promenade. Take your time, gaze over the unbelievably perfect Tuscan views extending in all directions, stop for coffee or gelato. There are a couple churches worth spending a little bit of time in, and some museums too. But the fundamental attraction of San Gimignano is no doubt San Gimignano. If you’ve acquired a car, it’s an ideal ground for exploring this part of Tuscany.

Getting To San Gimignano

If your departure is outside Europe, it’s in all probability that you’ll be flying into Rome ’s Fiumicino Airport. From Rome to San Gimignano, you can rent a car and drive right away to San Gimignano or you can take a train to a larger city like Florence or Siena and then get a bus (or rent a car there) to get to San Gimignano. If your starting point is in Europe, Florence or Pisa is probably an more easygoing airport to fly into. Search for deals on airfare to Italy and take a look at the low-cost offers in Europe.

‘San Gimignano delle belle Torri’ is in Tuscany, 56 km south of Florence. It served as an important relay point for pilgrims travelling to or from Rome on the Via Francigena. The patrician families who controlled the town built around 72 tower-houses (some as high as 50 m) as symbols of their wealth and power. Although only 14 have survived, San Gimignano has retained its feudal atmosphere and appearance. The town also has several masterpieces of 14th- and 15th-century Italian art.

Brief synthesis
The Historic Centre of San Gimignano sits on a height of land, dominating the surrounding landscape. During the Middle Ages, its location in Val d’Elsa, 56 km south of Florence, provided an important relay point for pilgrims travelling to or from Rome on the Via Francigena. The town became independent in 1199 and between the 11th and the 13th century the noble families and upper middle-class merchants who controlled the free town built many fortified tower houses (probably 72) as symbols of their wealth and power. The town grew around two principal squares: the triangular Piazza della Cisterna, ornamented with a lovely central well, and the Piazza Duomo, dating from the late 13th century with its more intricate layout containing the majority of public and private monuments. After 1353, the town went into a period of decline due to waves of famine and plague that caused a drastic decrease in population. Within a hundred years, the town was downgraded to the level of the other lands under the Florentine control. This status, however, prevented the town from the urban renewal that transformed many Italian historical towns after the Middle Ages.

While only 14 of the original tower houses have survived, San Gimignano has retained its feudal atmosphere and appearance, embellished with several notable palaces during the 12th and 14th century. The town also has several masterpieces of Italian art dating to the 14th and 15th centuries. These are found in the cathedral as well as in other prominent religious and public buildings.

The Historic Centre of San Gimignano is a cultural site of exceptional value, since it has treasured its architectural homogeneity and its original urban layout. The buildings within the town’s double wall provide a shining example of medieval architecture with influences of Florentine, Sienese, and Pisan styles from the 12th to the 14th century. 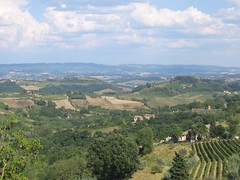 You can find many of the properties in San Gimignano are farm tourism, and most of those are outside the city itself. The good news with this is that you’re likely to have spectacular views of San Gimignano’s famous towers, but it means that you’ll have to hop in your car or put your feet to good use to roam its beautiful cobbled streets. There are a few San Gimignano hotels right inside the old city which are passably priced, so if you wish to have the medieval streets right outside your door, that’s the way to go. Begin by looking through these San Gimignano accommodations and San Gimignano hotels and book a room today.

Well, what's there to tell about Pisa? It's got a…

One of the most fashionable destinations for people on a…

If you're likely to be going to Italy soon, you'll…